Translation, theatre series and performance in Portugal during the Estado Novo: the case of Teatro no Bolso [Pocket Theatre] / (Seminar)

The history of theatre in Portugal is inextricably linked to that of theatre translation, since Portuguese stage productions and theatre repertoires were, and still are, dominated by foreign models and translated plays. A case in point is the period of the Estado Novo, mainly from 1950s onwards, which was marked by prolific translation both for stage and publication, subject to a looser control by the Regime and characterized by a movement of aesthetic renovation. This panorama was largely encouraged by experimental and university theatre companies in partnership with small-scale publishers that published translated playtexts in dedicated theatre series. The constraint on producing original plays on particular subjects gave rise to the introduction of foreign voices of dissent and vanguard aesthetics.

In this presentation, I will look at the context of this editorial and theatre practice at the time –i.e. selected playtexts, translators, assumed translating strategies and disseminating routes, focusing on one particular series called Teatro no Bolso (Pocket Theatre), published by Contraponto, and edited by the Portuguese flamboyant writer, art critic and translator Luiz Pacheco. 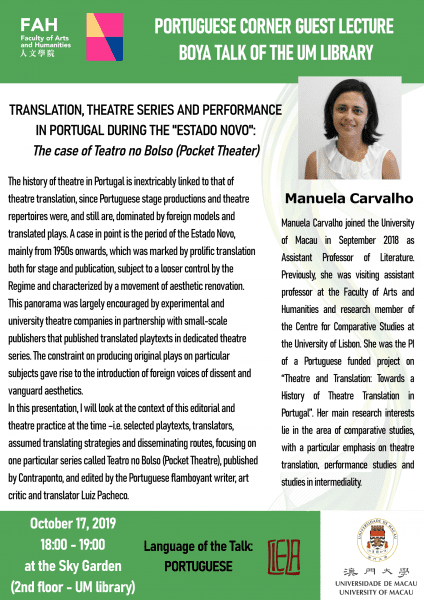