Nowadays, less than 5% of all Portuguese speakers use European Portuguese, the metropolitan variety that lies in the foundations of all Portuguese transplanted varieties. In order to understand the factors that led to this state of affairs, in this talk, I will discuss the Portuguese language situation in the Atlantic, in particular in Africa (Cape Verde, Guinea-Bissau, São Tomé and Príncipe, Angola and Equatorial Guinea) and in Brazil. I will show that the very expansion of Portuguese in these territories can be linked, on one hand, to 19th and 20th centuries phenomena such as urbanization processes (namely migration from rural areas to cities), mass schooling (post-1975, in general), mass media (press, radio, and television), and better sanitation conditions. On the other hand, it is also associated with the adoption, by the local elites, of Portuguese as an official language and an instrument of the State, after independence. This option led to a conscious language shift by the people on these territories which promoted Portuguese to the detriment of local languages. At the same time, I will discuss some aspects of the economic relationship between China and the Portuguese speaking countries (PALOPs) and the importance of Portuguese language in this partnership. 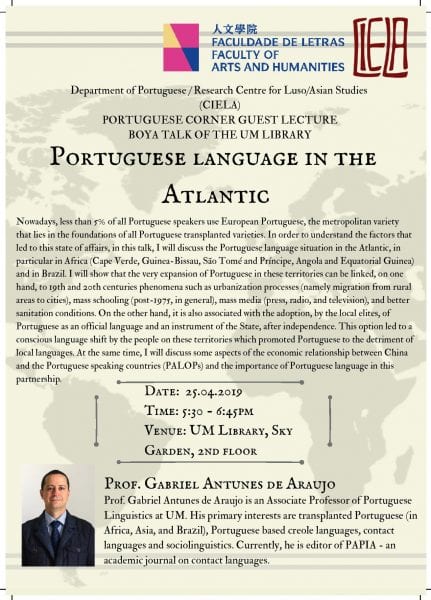