TRIBUTES TO JOSÉ SARAMAGO ON HIS CENTENNIAL BIRTH ANNIVERSARY 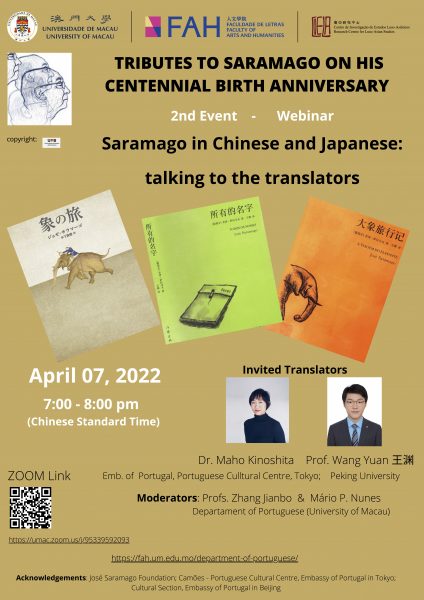 The Research Centre for Luso-Asian Studies (CIELA) is pleased to invite all those interested to the Webinar “TRIBUTES TO JOSÉ SARAMAGO ON HIS CENTENNIAL BIRTH ANNIVERSARY – The Year of the Death Of Ricardo Reis’ as a Paradigm of Saramagian Invention” by Professor Helena Buescu (University of Lisbon), being held on March 21, 23 and 24, 2022, from 7:15 pm to 9:15 pm, via Zoom: https://umac.zoom.us/j/95471270325

Please register HERE for the event.

José Saramago (1922-2010), Portugal’s Nobel Literature Laureate (1988), is not only a distinguished author within the Portuguese literary sphere, but has long become part of the group of the most significant and read authors who shaped 20th-century world literature. This year his centennial birth anniversary is being celebrated worldwide by many academic and non-academic institutions. The Department of Portuguese at FAH/UM, through its Research Centre, CIELA, will also commemorate this occasion with two open online tributes.

This 3 session seminar will provide an introduction to Saramago’s main lines of thought and creativity developed throughout his vast literary production, through the presentation, comments, and analysis of two of his works: O Ano da Morte de Ricardo Reis (‘The Year of the Death of Ricardo Reis’) and Viagem a Portugal (‘Voyage to Portugal’). It proposes these two works as bearing the pillars of Saramago’s literary creation transversal to the author’s remaining production.

The seminar will be given by Prof. Helena Buescu (University of Lisbon, Portugal), and held in Portuguese. The main target audience is advanced Graduate and Postgraduate students pursuing or interested in Portuguese language literary studies. But all others interested in attending are very welcome.

Professor Helena Carvalhão Buescu is a Professor of Comparative Literature and Portuguese Literature at the Faculty of Letters, University of Lisbon. She has collaborated, taught, and been invited to some of the most prestigious international universities in the United States, Europe, Brazil, and Macao. She is a member of the Lisbon Academy of Sciences and the European Academy and has received several awards for her essays. She is currently directing the project Comparative World Literature in Portuguese, having published to date four of the seven due volumes, by the publisher Tinta-da-China, in Lisbon. She is a poet, with two poetry books published in Portugal and several essays published in Portugal and overseas. She is also part of several Portuguese and European evaluation committees.

Saramago in Chinese and Japanese: talking to the translators

This is the second event organized by the Department of Portuguese & CIELA to mark the worldwide commemorations of the Portuguese Nobel Literature Laureate, following an online seminar held on April 21,22 & 24.  This webinar will focus on the experience of translating Saramago into East Asian Languages, specifically to Chinese and Japanese. In this webinar, one of his translators to Chinese, Prof. Wang Yuan, and to Japanese, Dr. Kinoshita Maho, will share their personal experiences in translating this author to these respective languages. Saramago is well known for his very particular use of punctuation as well as resorting to many historic references specific to Portugal but many times unknown to the foreign reader. How these two and other challenges that arise from his works can be tackled and possibly resolved for the Chinese and the Japanese readers is what the two invited translators will share with the audience. The focus will specifically be on the novels ‘Journey of the Elephant’ and  ‘All the Names’. A general perspective of Saramago’s translations in China and Japan, as well as the author’s receptivity in both countries, will also be discussed.

Following their presentations the session will be open to further discussion on the topics covered in an informal exchange between the invited speakers, the moderators and the online audience.