A DUAL TRIBUTE TO CLARICE LISPECTOR ON HER CENTENNIAL BIRTH ANNIVERSARY

On the occasion of the centennial anniversary of the birth of one of the most prominent Brazilian and world-literature authors (10th December), CIELA is pleased to announce two separate events in her honor.

The objective of this symposium is to present two important aspects of her work to Post-Graduate students in Brazil, Portugal and China. Each of the two invited researchers on Lispector’s work will give a short presentation, followed by a Q&A and discussion session with the audience online. Below are the organizers’ and invited guests’ details and talk abstracts.

Title of talk: From the recipe on how to kill cockroaches to the short story  “A Quinta da História”

Among her various activities in the Rio de Janeiro press, the writer Clarice Lispector wrote women’s newspaper columns. In the newspaper Comício, for example, in 1952, with the pseudonym of Tereza Quadros, we find a journalist who, when assuming the role of columnist, deals with amenities and trivial things, adapting, apparently, to the aesthetics of the female press. Even talking about fashion, home, children and matters of the heart, a paradigm so common in publications aimed at women, the writer takes advantage of the newspaper’s space to create fiction. The recipes she publishes are often fragments of short stories or novels and mix naturally with the page, creating a game of meanings. It is the case of a recipe for killing cockroaches that ends up being the origin of the creative process of the short story “A Quinta História”.

Aparecida Maria Nunes holds a doctorate and a master’s degree in Literature, in the area of ​​Brazilian Literature, from the Department of Classical and Vernacular Literature at the University of São Paulo and post-doctorate in Literary Studies from the Federal University of Minas Gerais. She is an associate professor at the Federal University of Alfenas, where she teaches classes in Brazilian Literature. Pioneer in the studies on the journalistic production of Clarice Lispector, she published the book Clarice Lispector Journalist: Páginas Femininas  & Outras Páginas, in addition to other works she organized for the publisher Rocco: Clarice na Cabeceira: Jornalismo, Correio para Mulheres, Correio Feminino and Só para Mulheres, the last two of which were translated and published in Spain by Siruela.

Title of the talk: The Grotesque in transit in Clarice Lispector:  from the chronicle to novel

The present study investigates the aesthetics of the grotesque, from the chronicle “The waters of the sea” (1968) to the novel “Uma Aprendiz ou o Livro dos Pleasures” (1969), both by Clarice Lispector. Republished, in different genres, such as chronicles and novels, textual migrations are noted, which allow explaining aesthetic-literary effects to be experienced and causing both deformation in fictional texts and corrosive transgression in genres.

Joel Rosa de Almeida is a PhD student, in Literature, at USP. Author of the literary essay A experimentação do grotesco em Clarice Lispector: ensaios sobre literatura e pintura (The experimentation of the grotesque in Clarice Lispector: essays on literature and painting), published by Edusp / Nankin; he has been a university professor for 15 years and a researcher on the work of Clarice Lispector, having as a central object of his current research the posthumous novel Um sopro de vida (pulsações) (A breath of life (pulsations)). 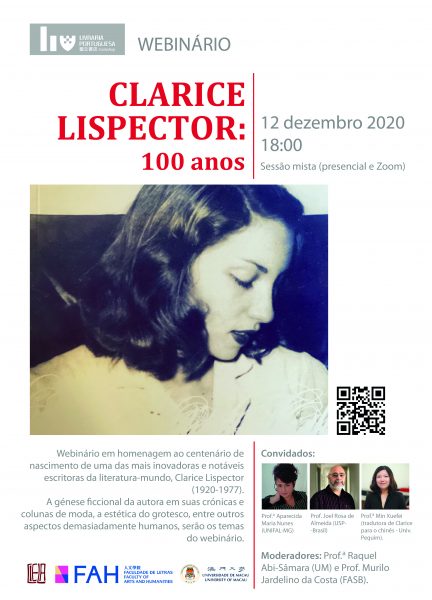 This webinar will provide a platform for the presentation and discussion of themes such as the author’s fictional genesis in her chronicles and fashion columns, the aesthetics of the grotesque, among other excessively human aspects. This discussion will be held by professors Aparecida Maria Nunes (UNIFAL-MG) and Joel Rosa de Almeida (USP-Brazil), specialists in Clarice’s work, and will also include the participation of Clarice’s translator into Chinese, Professor Min Xuefei (Beijing University).

Professor Min Xeufei holds a Master’s degree in Spanish Literature from Beijing University and a Ph.D. in Portuguese Literature from the University of Coimbra. She began her academic career at the Macau Polytechnic Institute in 2003 and has been an Associate Professor at the Institute of Foreign Studies of Beijing University since 2009. She has translated numerous literary works in Portuguese to Chinese, including three of Clarice Lispector’s books, A Hora da Estrela, Felicidade Clandestina e Laços de Família.

The session will be moderated by professors Raquel Abi-Sâmara (UM) and Murilo Jardelino da Costa (FASB).

We encourage all those interested, who are in Macau, to attend the session in situ at the Macau Portuguese Bookshop from where it will be transmitted.