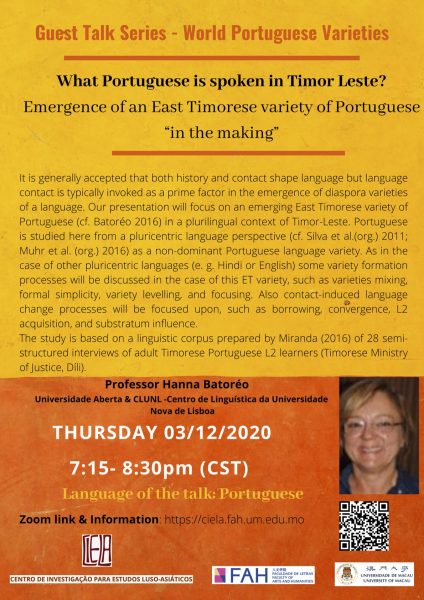 The current talk will inaugurate the Ciela continuous guest talk series World Portuguese Varieties. The guest speaker is Professor Hanna Batoréo, Associate Professor with ‘agregação’ (habilitation to full professor) at Universidade Aberta, in Lisbon, since 1997. She earned her PhD in Linguistics/ Psycholinguistics in 1997. Her PhD thesis “Expressão do Espaço em Português Europeu” (Expression of Space in European Portuguese) was published in 2000 by FCT/ Fundação Calouste Gulbenkian). Since 2007 she has been an integrated member of the research Centre: Centro de Linguística da Universidade Nova de Lisboa – CLUNL, where she was coordinator of the Cognition, Language and Multimodal Communication – CLMC Group (2017-2020). Her research explores implications from and for psycholinguistic, cross-cultural and cross-linguistic research, but also in the area of Language Acquisition and Development (Psycholinguistics), especially with a focus on Acquisition / Learning of Portuguese as a Non-Native Language (L2 or Foreign Language), Portuguese as a Heritage Language (PHL) and Bilingualism. The specific focus of Hanna Batoréo’s work is the study of Portuguese perspectivised as a pluricentric language, observed and analyzed in a multiplicity of registers, socially and culturally differentiated contexts, and types of linguistic variation. Given the Luso-Brazilian character of researchers gathered in the CLCM Group, she collaborates in the research that focuses on the Dominant Portuguese Varieties (DV) of national character – European Portuguese (EP) and Portuguese of Brazil (BP) – but also takes into consideration non-dominant varieties (NDVs) still in formation (i. e., “in- the-making” process) such as, for instance, Portuguese of Timor-Leste.

Due to unexpected circumstances, this talk has been postponed. The new date will be announced ASAP.